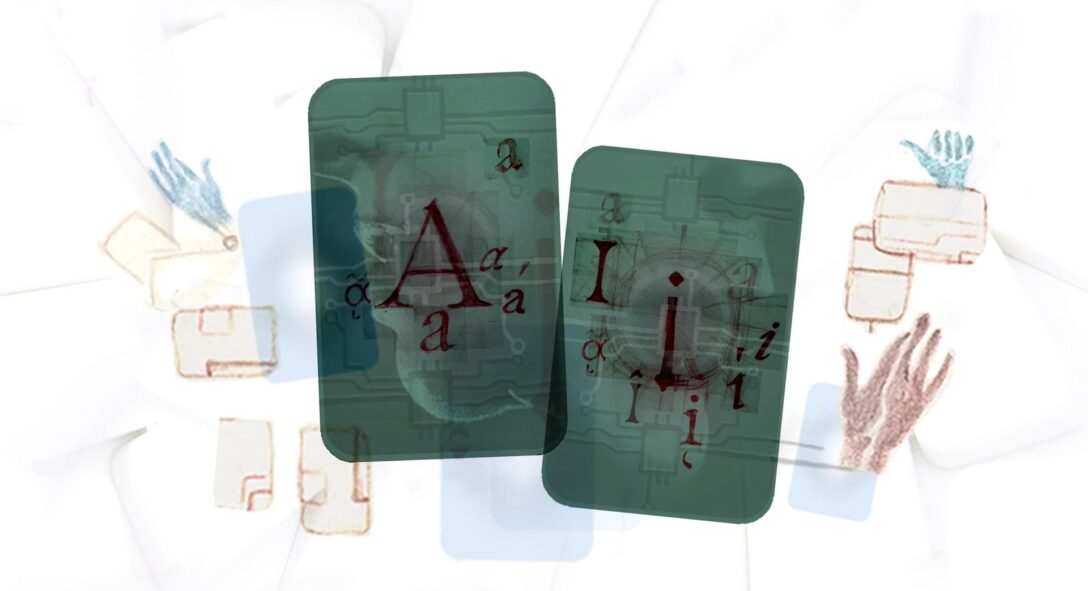 The Journey of Alina Constantin’s Art

Alina’s image, Handmade A.I., was one of the first additions to the Better Images of AI repository. The description affixed to the image on the site outlines its ‘alternative redefinition of AI’, bringing back into play the elements of human interaction which are so frequently excluded from discussions of the tech. Yet now, a few months on from the introduction of the image to the site, Alina’s work itself has undergone some ‘alternative redefinition’. This blog post explores the journey of this particular image, from the details of its conception to its numerous uses since: How has the image itself been changed, adapted in significance, semantically used?

Alina Constantin is a multicultural game designer, artist and organiser whose work focuses on unearthing human-sized stories out of large systems. For this piece, some of the principles of machine learning like interpretation, classification, and prioritisation were encoded as the more physical components of human interaction: ‘hands, mouths and handwritten typefaces’, forcing us to consider our relationship to technology differently. We caught up with Alina to discuss further the process (and meaning) behind the work.

What have been the biggest challenges in creating Better Images of AI?

Representing AI comes with several big challenges. The first is the ongoing inundation of our collective imagination with skewed imagery, falsely representing these technologies in practice, in the name of simplification, sensationalism, and our human impulse towards personification. The second challenge is the absence of any single agreed-upon definition of AI, and obviously the complexity of the topic itself.

What was your approach to this piece?

My approach was largely an intricate process of translation. To stay focused upon the ‘why of A.I’ in practical terms, I chose to focus on elements of speech, also wanting to highlight the human sources of our algorithms in hand drawing letters and typefaces.

I asked questions, and selected imagery that could be both evocative and different. For the back side of the cards, not visible in this image, I bridged the interpretive logic of tarot with the mapping logic of sociology, choosing a range of 56 words from varying fields starting with A/I to allow for more personal and specific definitions of A.I. To take this idea further, I then mapped the idea to 8 different chess moves, extending into a historical chess puzzle that made its way into a theatrical card deck, which you can play with here. You can see more of the process of this whole project here.

This process of translating A.I via my own artist’s tool set of stories/gameplay was highly productive, requiring me to narrow down my thinking to components of A.I logic which could be expressed and understood by individuals with or without a background in tech. The importance of prototyping, and discussing these ideas with audiences both familiar and unfamiliar with AI helped me validate and adjust my own understanding and representation–a crucial step for all of us to assure broader representation within the sector.

So how has Alina’s Better Image been used? Which meanings have been drawn out, and how has the image been redefined in practice?

One implementation of ‘Handmade A.I.’, on the website of one of our affiliated organisations We and AI, remains largely aligned with the artist’s reading of it. According to We and AI, the image was chosen due to its re-centring of the human within the AI conversation: the human hands still hold the cards, humanity are responsible for their shuffling, their design (though not necessarily completely in control of which ones are dealt.) Human agency continues to direct the technology, not the other way round. As a key tenet of the organisation, and a key element of the image identified by Alina, this all adds up.

A similar usage by the Universität Hamburg, to accompany a lecture on responsibility in the AI field, follows a similar logic. The additional slant of human agency considered from a human rights perspective again broadens Alina’s initial image. The components of human interaction which she has featured expand to a more universal representation of not just human input to these technologies but human culpability–the blood, in effect, is on our hands.

Another implementation, this time by the Digital Freedom Fund, comes with an article concerning the importance of our language around these new technologies. Deviating slightly from the visual, and more into the semantics of artificial intelligence, the use may at first seem slightly unrelated. However, as the content of the article develops, concerns surrounding the ‘technocentrism’ rather than anthropocentrism in our discussions of AI become a focal point. Alina’s image captures the need to reclaim language surrounding these technologies, placing the cards firmly back in human hands. The article directly states, ‘Every algorithm is the result of a desire expressed by a person or a group of persons’ (Meyer, 2022.) Technology is not neutral. Like a pack of playing cards, it is always humanity which creates and shuffles the deck.

This is not the only instance in which Alina’s image has been used to illustrate the relation of AI and language. The question “Can AI really write like a human?” seems to be on everyone’s lips, and ‘Handmade A.I.’ , with its deliberately humanoid typeface, its natural visual partner. In a blog post for LSE, Marco Lehner (of BR AI+) discusses employment of a GPT-3 bot, and whilst allowing for slightly more nuance, ultimately reaches a similar crux– human involvement remains central, no matter how much ‘automation’ we attempt.

Even as ‘better’ images such as Alina’s are provided, we still see the same stock images used over and over again. Issues surrounding the speed and need for images in journalistic settings, as discussed by Martin Bryant in our previous blog post, mean that people will continue to almost instinctively reach for the ‘easy’ option. But when asked to explain what exactly these images are providing to the piece, there’s often a marked silence. This image of a humanoid robot is meaningless– Alina’s images are specific; they deal in the realities of AI, in a real facet of the technology, and are thus not universally applicable. They relate to considerations of human agency, responsible AI practice, and don’t (unlike the stock photos) act to the detriment of public understanding of our tech future.

The impetus for the most recent contributions to our image repository was described by the artist as promoting understanding of present AI systems. Rens Dimmendaal, Principal Data Scientist at GoDataDriven, discussed with Better Images of AI the need to cut through all the unnecessary complication of ideas within the AI field; a goal which he believes is best achieved through visual media.

Discussions of the ‘black box’ of AI are not exactly new, and the recent calls for explainability statements to accompany new tech from Best Practice AI are certainly attempting to address the problem at some level. Tim Gordon writes of the greater ‘transparency’ required in the field, as well as the implicit acknowledgement that any wider impacts have been considered. Yet, for the broader spectrum of individuals whose lives are already being influenced by AI technologies, an extensive, jargon-filled document on the various inputs and outputs of any single algorithm is unlikely to provide much relief.

This is where Dimmendaal comes in: to provide ‘understanding at a glance’ (and also to ‘make a pretty picture’, in his own words). The artist began with the example of the decision tree. All present tutorials on this topic, in his view, use datasets which only make the concept more difficult to understand–have a look at ‘decision tree titanic’ for a clear illustration of this.  Another explanation was provided by r2d3. Yet, for Rens, this still employed an overly complicated ‘usecase’. Hence, this selection of images.

Rens cites his inspiration for this particular project as Roger Johansson’s recreation of the ‘Mona Lisa’, using genetic programming. In the original, Johansson attempts to reproduce the piece with a combination of semi-transparent polygons and an evolutionary algorithm, gradually mutating the initial randomly generated polygons to move closer and closer to the original image. Rens recreated elements of this code as a starting point, then with the addition of the triptych format and implementation of a decision tree style algorithm made the works his own.

In keeping with his motivations–making a ‘pretty picture’, but chiefly contributing to the greater transparency of AI methodologies–Dimmendaal elected the triptych to present his outputs. The mutation of the image is shown as a fluid, interactive process, morphing across the triptych from left to right, from abstraction to the original image itself. Getting a glimpse inside the algorithm in this manner allows for the ‘understanding at a glance’ which the artist wished to provide–the image shifts before our eyes, from the initial input to the final output.

Engaging with the decision tree was not only a practical decision, related to the prior lack of adequate tutorial, but also an artistic one. As Dimmendaal explains, ‘applying a decision tree to an actual tree was just too poetic an opportunity to let slide.’ We think it paid off…

Dimmendaal has worked with numerous algorithmic systems previously (including: k-means, nearest neighbours, linear regression, svm) but cites this particular combination of genetic programming, decision trees and the triptych format as producing the nicest outcome. More of his work can be found both in our image repository, and on his personal website.

Whether or not a detailed understanding of algorithms is something you are interested in, you can input your own images to the tool Rens created for this project here and play around with making your own decision tree art. What do images relevant to your industry, product or interests look like seen through this process? Make sure to tag Better Images of AI in your AI artworks, and credit Rens. We’re excited to see what you come up with!