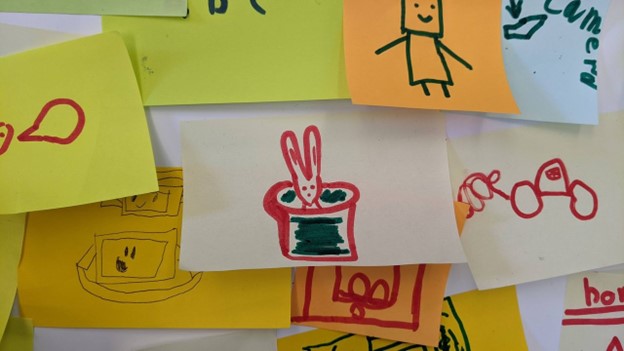 The BBC Research and Development team asked hundreds of children this question as part of their Get Curious event at the Manchester Science Festival. The event aimed to help children and families understand what AI is and share the interesting ways that it is used at the BBC.

That was the question we posed to hundreds of children and families passing through the 2022 Manchester Science Festival at the Science and Industry Museum. Representing the work of BBC R&D, we set up shop in the main hall, primed with demos of intelligent wildlife cameras used on BBC productions, and interactive games that explain how AI works.

However, one task was something that all ages could have a go at. We handed each passerby a post it note, asked them to draw what they thought artificial intelligence looked like, and encouraged them to stick it on our wall of AI images.

As well as being an artsy refuge from the busy museum, this collective mind map-come-collaborative art project had a purpose. We wanted to to see how early unhelpful AI image tropes set in, and explore what inspiration can be taken from the youngest of all generations in creating Better Images of AI.

So, with an empty wall, we started collecting drawings.

With such a range of ages and understanding of artificial intelligence, a lot of this exercise involved the team helping kids understand what AI is and where they might come across it. Getting a 7-year-old to understand what you meant by AI called for a lot of obvious reference points. Talking about apps on smartphones, and voice assistants like Alexa both proved to be useful, and of course, robots! As a result, plenty of sketches of iPads, smart speakers and wacky androids lined the wall.

Some drawings were also inspired by our other activities demonstrating AI. Many latched on to the idea of birds and smart cameras from our wildlife identification demo. A few also tried to represent the confusion seen when AI comes across something it is not trained to recognise.

The older children at the festival were also curious about what was going on under the hood. “But how does it actually work?”. These explanations and discussions prompted more literal interpretations of what AI looks like. An overworked laptop, computer chips and even sketches of the streams of coded data.

A number of drawings pulled from the biological tropes of AI, including the classic disembodied brain to make a comparison with human intelligence. Another sketch used a DNA double helix, presumably to represent a kind of ‘programmed’ intelligence. Other less helpful tropes also emerged; to one participant, the answer to “what do you think AI looks like?” was the Meta logo.

My favourite image of AI from the festival came from a father trying to explain AI to his son. “AI is just like…” He paused, before suggesting:

The two then sketched an image that perfectly encapsulated the wonder of AI, along with the mystery that many feel when faced with results from ‘black box’ algorithms. A rabbit appearing from a magician’s hat.

At the end of the day, we were left with a wall containing over one hundred creative images of AI. I was also left with two conclusions. Firstly, people’s images of AI are shaped heavily by how AI has been explained to them. If the explanation contains certain tropes, so will their understanding of what AI looks like.

Secondly, asking children, families, and other non-technical people the simple question of “what do you think AI looks like?” showed how curious the public really are about AI. The imaginative responses to this question provide fresh inspiration of what to do — and what not to do — when creating images of AI.

Ben Hughes is a research engineer at BBC R&D. His work in AI and ML has involved research in music information retrieval and creating experiences for explaining machine learning to the general public. The latter work has led to school workshops and outreach on AI education.

Tristan Ferne is the lead producer for the Internet Research & Future Services team where he develops and runs projects that use technology and design to prototype the future of media. He has over 15 years experience in R&D for the web, TV and radio.

Learn more about this project

This project was conducted as part of a BBC R&D’s Get Curious event at the Manchester Science Festival. The event aimed to help children and families understand what AI is and share the interesting ways that it is used at the BBC.

Discover more about this event

View all posts by Ben Hughes