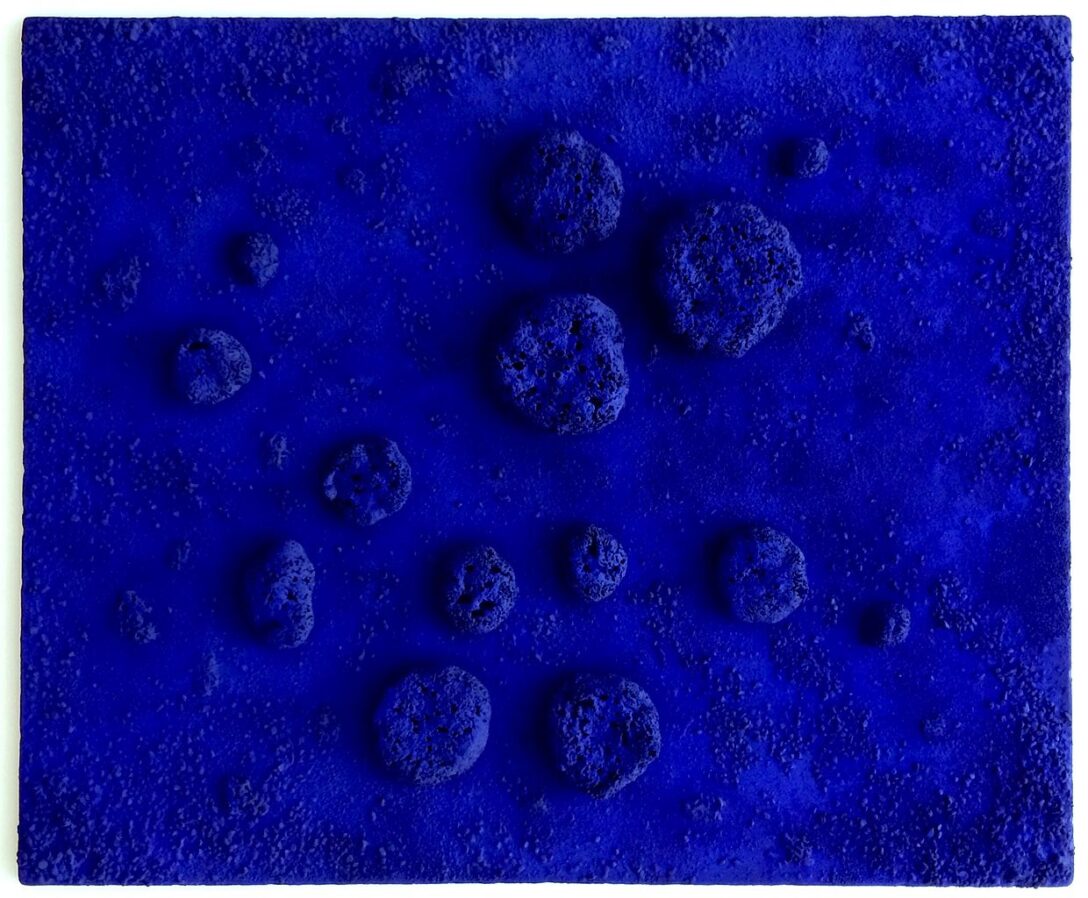 Most of the criticism concerning stock images of AI focuses on their cliched and kitschy subjects. But what if a major ethical problem was not in the subjects but rather in the background? What if a major issue was, for instance, the abundant use of the color blue in the background of these images? This is the thesis we would like to discuss in detail in this post.

Stock images are usually ignored by researchers because they are considered the “wallpaper” of our consumer culture. Yet, they are everywhere. Stock images of emerging technologies such as AI (but also quantum computing, cloud computing, blockchain, etc.) are widely used, for example, in science communication and marketing contexts: conference announcements, book covers, advertisements for university masters, etc. There are at least two reasons for us to take these images seriously.

The first reason is “ethical-political” (Romele, forthcoming). It is interesting to note that even the most careful AI ethicists pay little attention to the way AI is represented and communicated, both in scientific and popular contexts. For instance, a volume of more than 800 pages like the Oxford Handbook of Ethics of AI (Dubber, Pasquale, and Das 2020) does not contain any chapter dedicated to the representation and communication, textual or visual, of AI; however, the volume’s cover image is taken from iStock, a company owned by Getty Images. 1 The subject of it is a classic androgynous face made of “digital particles” that become a printed circuit board. The most interesting thing about the image, however, is not its subject (or figure, as we say in art history) but its background, which is blue. I take this focus on the background rather than the figure from the French philosopher Georges Didi-Huberman (2005) and, in particular, from his analysis of Fra Angelico’s painting.

Didi-Huberman devotes some admirable pages to Fra Angelico’s use of white in his fresco of the Annunciation painted in 1440 in the convent of San Marco in Florence. This white, present between the Madonna and the Archangel Gabriel, spreads not only throughout the entire painting but also throughout the cell in which the fresco was painted. Didi-Huberman’s thesis is that this white is not a lack, that is, an absence of color and detail. It is rather the presence of something that, by essence, cannot be given as a pure presence, but only as a “trace” or “symptom”. This thing is none other than the mystery of the Incarnation. Fra Angelico’s whiteness is not to be understood as something that invites absence of thought. It is rather a sign that “gives rise to thought,”2 just as the Annunciation was understood in scholastic philosophy not as a unique and incomprehensible event, but as a flowering of meanings, memories, and prophecies that concern everything from the creation of Adam to the end of time, from the simple form of the letter M (Mary’s initial) to the prodigious construction of the heavenly hierarchies.

The image above collects about 7,500 images resulting from a search for “Artificial Intelligence” in Shutterstock. It is an interesting image because, with its “distant viewing,” it allows the background to emerge on the figure. In particular, the color of the background emerges. Two colors seem to dominate these images: white and blue. Our thesis is that these two colors have a diametrically opposed effect to Fra Angelico’s white. If Fra Angelico’s white is something that “gives rise to thought,” the white and blue in the stock images of AI have the opposite effect.

Consider the history of blue as told by French historian Michel Pastoureau (2001). He distinguishes between several phases of this history: a first phase, up to the 12th century, in which the color was almost completely absent; an explosion of blue between the 12th and 13th centuries (consider the stained glass windows of many Gothic cathedrals); a moral and noble phase of blue (in which it became the color of the dress of Mary and the kings of France); and finally, a popularization of blue, starting with Young Werther and Madame Bovary and ending with the Levi’s blue jeans industry and the company IBM, which is referred to as the Big Blue. To this day, blue is the statistically preferred color in the world. According to Pastoureau, the success of blue is not the expression of some impulse, as could be the case with red. Instead, one gets the impression that blue is loved because it is peaceful, calming, and anesthetizing. It is no coincidence that blue is the color used by supranational institutions such as UN, UNESCO, and European Community, as well as Facebook and Meta, of course. In Italy, the police force is blue, which is why policemen are disdainfully called “Smurfs”.

If all this is true, then the problem with stock AI images is that, instead of provoking debate and “disagreement,” they lead the viewer into forms of acceptance and resignation. Rather than equating experts and non-experts, encouraging the latter to influence innovation processes with their opinions, they are “screen images”—following the etymology of the word “screen,” which means “to cover, cut, and separate”. The notion of “disagreement” or “dissensus” (mésentente in French) is taken from another French philosopher, Jacques Rancière (2004), according to whom disagreement is much more radical than simple “misunderstanding (malentendu)” or “lack of knowledge (méconnaissance)”. These, as the words themselves indicate, are just failures of mutual understanding and knowledge that, if treated in the right way, can be overcome. Interestingly, much of the literature interprets science communication precisely as a way to overcome misunderstanding and lack of knowledge. Instead, we propose an agonistic model of science communication and, in particular, of the use of images in science communication. This means that these images should not calm down, but rather promote the flourishing of an agonistic conflict (i.e., a conflict that acknowledges the validity of the opposing positions but does not want to find a definitive and peaceful solution to the conflict itself).3 The ethical-political problem with AI stock images, whether they are used in science communication contexts or popular contexts, is then not the fact that they do not represent the technologies themselves. If anything, the problem is that while they focus on expectations and imaginaries, they do not promote individual or collective imaginative variations, but rather calm and anesthetize them.

This brings me to my second reason for talking about stock images of AI, which is “aesthetic” in nature. The term “aesthetics” should be understood here in an etymological sense. Sure, it is a given that these images, depicting half-flesh, half-circuit brains, variants of Michelangelo’s The Creation of Adam in human-robot version, etc., are aesthetically ugly and kitschy. But here I want to talk about aesthetics as a “theory of perception”—as suggested by the Greek word aisthesis, which means precisely “perception”. In fact, we think there is a big problem with perception today, particularly visual perception, related to AI. In short, I mean that AI is objectively difficult to depict and hence make visible. This explains, in our opinion, the proliferation of stock images.

We think there are three possible ways to depict AI (which is mostly synonymous with machine learning) today: (1) the first is by means of the algorithm, which in turn can be embedded in different forms, such as computer code or a decision tree. However, this is an unsatisfactory solution. First, because it is not understandable to non-experts. Second, because representing the algorithm does not mean representing AI: it would be like saying that representing the brain means representing intelligence; (2) the second way is by means of the technologies in which AI is embedded: drones, autonomous vehicles, humanoid robots, etc. But representing the technology is not, of course, representing AI: nothing actually tell us that this technology is really AI-driven and not just an empty box; (3) finally, the third way consists of giving up representing the “thing itself” and devoting ourselves instead to expectations, or imaginaries. This is where we would put most of the stock images and other popular representations of AI.4

Now, there is a tendency among researchers to judge (ontologically, ethically, and aesthetically) images of AI (and of technologies in general) according to whether they represent the “thing itself” or not. Hence, there is a tendency to prefer (1) to (2) and (2) to (3). An image is all the more “true,” “good,” and “aesthetically appreciable” the closer it is (and therefore the faithful it is) to the thing it is meant to represent. This is what we call “referentialist bias”. But referentialism, precisely because of what we said above, works poorly in the case of AI images, because none of these images can really come close to and be faithful to AI. Our idea is not to condemn all AI images, but rather to save them, precisely by giving up referentialism. If there is an aesthetics (which, of course, is also an ethics and ontology) of AI images, its goal is not to depict the technology itself, namely AI. If anything, it is to “give rise to thought,” through depiction, about the “conditions of possibility” of AI, i.e., its techno-scientific, social-economic, and linguistic-cultural implications.

Alongside theoretical work such as the one we discuss above, we also try to conduct empirical research on these images. We showed earlier an image that is the result of quali-quantitative analysis we have conducted on a large dataset of stock images. In this work, we first used the web crawler Shutterscrape, which allowed us to download massive numbers of images and videos from Shutterstock. We obtained about 7,500 stock images for the search “Artificial Intelligence”. Second, we used PixPlot, a tool developed by Yale’s DH Lab.5 The result is accessible through the link in the footnote.6 The map is navigable: you can select one of the ten clusters created by the algorithm and, for each of them, you can zoom and de-zoom, and choose single images. We also manually labeled the clusters with the following names: (1) background, (2) robots, (3) brains, (4) faces and profiles, (5) labs and cities, (6) line art, (7) Illustrator, (8) people, (9) fragments, and (10) diagrams.

Finally, there’s another little project of which we are particularly fond. It is the Instagram profile ugly.ai.7 Inspired by existing initiatives such as the NotMyRobot!8 Twitter profile and blog, ugly.ai wants to monitor the use of AI stock images in science communication and marketing contexts. The project also aims to raise awareness among both stakeholders and the public of the problems related to the depiction of AI (and other emerging technologies) and the use of stock imagery for it.

In conclusion, we would like to advance our thesis, which is that of an “anaesthetics” of AI stock images. The term “anaesthetics” is a combination of “aesthetics” and “anesthetics.” By this, we mean that the effect of AI stock images is precisely one that, instead of promoting access (both perceptual and intellectual) and forms of agonism in the debate about AI, has the opposite consequence of “putting them to sleep,” developing forms of resignation in the general public. Just as Fra Angelico’s white expanded throughout the fresco and, beyond the fresco, into the cell, so it is possible to think that the anaesthetizing effects of blue expand to the subjects, as well as to the entire media and communication environment in which these AI images proliferate.

Alberto Romele is research associate at the IZEW, the International Center for Ethics in the Sciences and Humanities at the University of Tübingen, Germany. His research focuses on the interaction between philosophy of technology, digital studies, and hermeneutics. He is the author of Digital Hermeneutics (Routledge, 2020).

Dario Rodighiero is FNSF Fellow at Harvard University and Bibliotheca Hertziana. His research focuses on data visualization at the intersection of cultural analytics, data science, and digital humanities. He is also lecturer at Pantheon-Sorbonne University, and recently he authored Mapping Affinities (Metis Presses 2021).