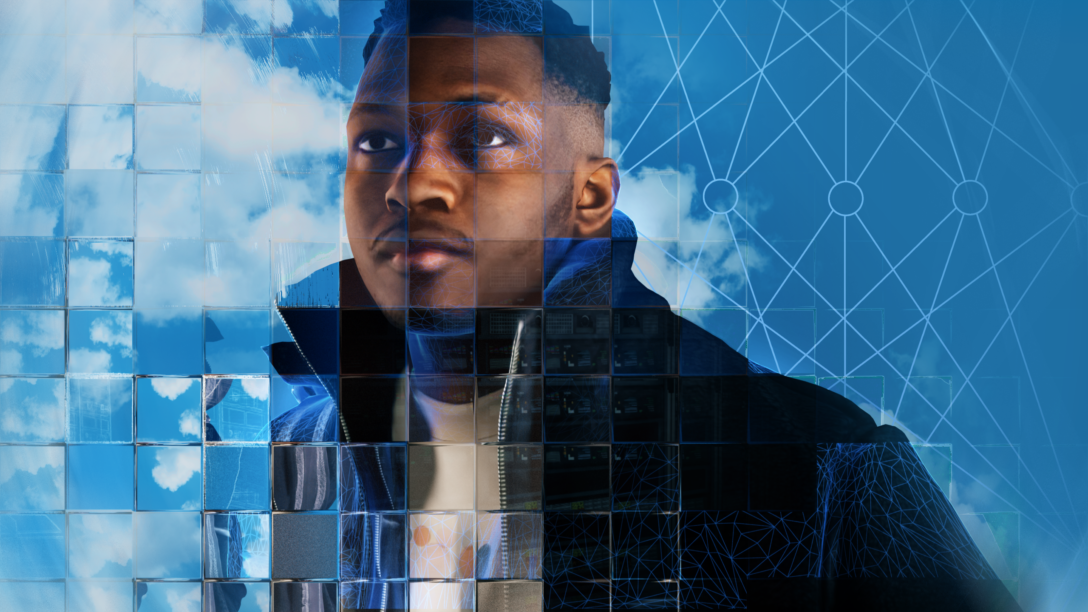 In working towards providing better images of AI, BBC R&D are commissioning some artists to create stock pictures for open licence use. Working with artists to find more meaningful and helpful yet visually compelling ways to represent AI has been at the core of the project.

The first artist to complete his commission is London-based Alan Warburton. Alan is a multidisciplinary artist exploring the impact of software on contemporary visual culture. His hybrid practice feeds insight from commercial work in post-production studios into experimental arts practice, where he explores themes including digital labour, gender and representation, often using computer-generated images (CGI).

Warburton’s first encounters with AI are likely familiar to us all through the medium of disaster and science fiction films that presented assorted ideas of the technology to broad audiences through the late 1990s and early 2000s.

As an artist, Warburton says it is over the past few years that technological examples have jumped out for him to help create his work. “In terms of my everyday working life, I suppose that rendering – the process of computing photorealistic images – has always been an incredibly slow and complex process but in the last four or five years various pieces of software that are part of the rendering  process have begun to incorporate AI technologies in increasing degrees,” he says. “AI noise reduction or things like rotoscoping are affected as the very mundane labour-intensive activities involved in the work of an animator and visual effects artists or image manipulator have been sped up.

“AI has also affected me in the way it has affected everyone else through smart phone technology and through the way I interact with services provided by energy companies or banks or insurance people. Those are the areas that are more obscured, obtuse or mysterious because you don’t really see the systems. But with image processing software I have an insight into the reality of how AI is being used.”

Warburton’s knowledge of software and AI tools has ensured that he is able to critically analyse which tools are beneficial. “I have been quite discriminatory in the way I use AI tools. There’s workflow tools that speed things up as well as image libraries and 3D model libraries. But the latter ones provide politically charged content even though it’s not positioned as such. Presets available in software will give you white skinned caucasian bodies and allow you to photorealistically simulate people but, for example, there’s hair simulation algorithms that default to caucasian hair. There’s this variegated tapestry of AI software tools, libraries, databases that you have to be discriminatory in the use of or be aware of the limitations and bias and voice those criticisms.”

The artist’s personal use of technology is also careful and thought through. “I don’t have my face online,” he says. “There’s no content of me speaking online, I don’t have photographs online. That’s slightly unusual for someone who works as an artist and has necessary public engagement as part of my job, but I’m very aware that anything I put online can be used as training data –  if it’s public domain (materials available to the public as a whole, especially those not subject to copyright or other legal restrictions) then it’s fair game.

“Whilst my image is unlikely to be used for nefarious ends or contribute directly to a problematic database, there’s a principle that I stick to and I have stuck to for a very long time. There’s some control over my data, my presence and my image that I like to police although I am aware that my data is used in ways that I don’t understand. Keeping control over that data requires labour, you have to go through all of the options in consent forms and carefully select what you are willing to give away and not. Being discriminatory about how your data is used to construct powerful systems of control and AI is a losing game. You have to some extent to accept that your participation with these systems relies on you giving them access to your data.”

When it comes to addressing the issues of AI representation in the wider world, Warburton can see the issues that need to be solved and acknowledges that there is no easy answer. “Over the past five or ten years we have had waves of visual interpretations of our present moment,” he says. “Unfortunately many of those have reached back into retro tropes. So we’ve had vaporwave and post-internet aesthetics and many different Tumblr vibes trying to frame the present visual culture or the technological now but using retro imagery that seemed regressive.

“We don’t have a visual language for a dematerialised culture.”

“We don’t have a visual language for a dematerialised culture. It’s very difficult to represent the culture that comes through the conduit of the smartphone. I think that’s why people have resorted to these analogue metaphors for culture. We may have reached the end of these attempts to describe data or AI culture, we can’t use those old symbols anymore and yet we still don’t have a popular understanding of how to describe them. I don’t know if it’s even possible to build a language that describes the way data works. Resorting to metaphor seems like a good way of solving that problem but this also brings in the issue of abstraction and that’s another problem.”

Alan’s experience and interest in this field of work have led to some insightful and recognisable visualisations of how AI operates and what is involved, which can act as inspiration for other artists with less knowledge of the technology. Future commissions from BBC R&D for the Better Images of AI project will enable other artists to use their different perspectives to help evolve this new visual language for dematerialised culture.

Jamillah Knowles is a writer and illustrator based in Bristol. She has a degree in AI and is working on a Masters in illustration with Falmouth University. In past incarnations, she spent decades as a tech and news editor, ran her own BBC Radio show for ten years and reported on uses of technology all over the world. Her work reflects a technical knowledge of AI and technology as well as human-machine interaction and social uses of technology. This is reflected in the editorial and website illustration she does for clients who are looking for some accuracy and a break from ‘glossy white robots and flying maths’. View all posts by Jamillah Knowles